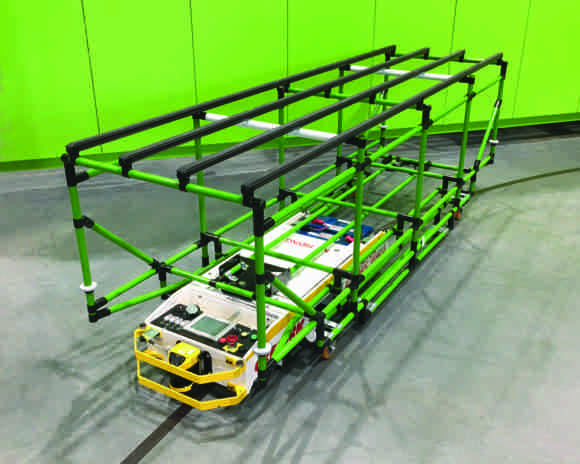 Greer, SC—Creform Corporation has designed and built a complete parts-handling system for an automotive supplier of injection molded parts. The system consists of a Creform BST AGV Model CA-A50060-NSI and Creform built carts. The AGV works as an automated tugger that runs along a 50 mm wide magnetic tape guidepath, slipping under stationary carts and then carrying the carts to designated stations.

When one of the six parts-handling carts is full, the waiting AGV, towing an empty cart, is released into a robotic cell.  It pushes the loaded cart forward as it tows the empty cart into position to be loaded.  Both carts are mechanically guided to ensure positioning accuracy.  Once in the load position, the empty cart is automatically locked in place and the AGV disconnects.  The AGV is then free to pull forward, extend its tow pin and engage the full cart.  It then tows the full cart to a secondary operation, disconnects automatically, and the cart is then manually unloaded.

The AGV continues and pulls around the circuit to a position where an empty cart waits.  Once it verifies the cart’s presence, it pulls forward and automatically hitches to the cart.  The AGV then tows the cart further around the circuit until it reaches its home position just before the robot cell.  It waits there to be released so the sequence can begin again. The timing of the operation is determined by a loading robot and communicated to the AGV via an 8-bit optical communication device.

In this particular operation, the AGV makes 20-30 trips a shift, operating for two shifts, with a manual battery exchange at the end of each shift.

Tuggers can handle a 50 course, 128 command control by programming with a PC or HMI. The AGV runs on 24V DC (two 12V batteries) and typically can have 10- hours run time.

The carts are built by Creform utilizing its 28mm pipe and joint system. The carts’ see-through design ensure visibility of and access to the AGV, while a key feature of the cart’s design is an open base at each end that provides easy access to the AGV’s control panel.

Each cart features high quality 4 in. casters to handle the frequent movements by the AGV and each features special hitch plates that enhance auto coupling/uncoupling of carts by AGV.  Hitch plates, with swivel casters at both ends allow the carts to be towed in either direction.

Each cart is rated for a distributed load of 400 lb.  The dimensions on the carts are 110”L x 32”W x 37”T. The cart shown is plastic coated steel pipe in “Apple Green” with black joints to complement the supplier’s plant color scheme.

Optional equipment includes an opportunity charging system to minimize the need for manual battery changes and an upgrade with radio communication to integrate into a Creform traffic control system. As Creform systems are simple and modular, the opportunity exists to add additional AGVs and carts in the future. Creform also provides a Preventive Maintenance program in order to ensure reliable operation.

The Creform System is used to create an array of material handling and efficiency enhancing devices and is a proven component in continuous improvement and lean manufacturing programs. The company partners with customers in developing and implementing these programs.

Creform kitting cart, an efficient way to organize, kit and transport parts for industrial use