You are here: Home / Featured Articles / Composite Pallet Blocks for Europallets and Other Pallets

The use of composite pallet blocks for Europallets and other pallets has become a popular choice in Europe, as pockets of emerging interest also take shape in the U.S. Composite blocks provide an example of how wood recycling can create an important upcycled product. 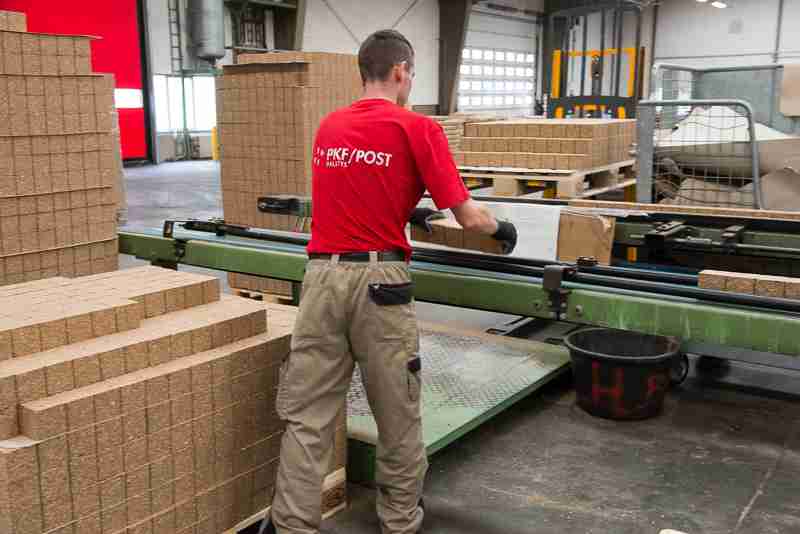 For a North American in Europe attending 2017 FEFPEB Congress, held in Maastricht, the Netherlands, one of the notable differences between U.S. and European markets was the presence of composite pallet blocks in europallets as well as other block pallets. Displays from major block producers were front and center in the exhibit area. Composite blocks have been used in europallets dating back to the 1990s. In fact, the use of composite blocks for pallets now commands roughly a 40% share of the pallet block market in Europe, according to Pat Donohoe, General Manager of Eirebloc. After recent expansion, the Cork, Ireland-based manufacturer now boasts an annual production of 110,000m3. Exports account for 85% of the company’s sales.

The penetration of composite pallet blocks varies by country. Germany, Donohoe reported, has the largest penetration, in the 50-60% range, while other countries still lag. The UK has been slower to adopt due to its multiplicity of pallet standards. Eirebloc has tripled its UK sales in the last 5 years, thanks to increased customer acceptance and its growing product line. The company started with three section sizes and seven products. It now has ten sections and 55 products.

Eirebloc blocks are certified by EPAL, and are approved for use by CHEP. Regarding further product development, Eirebloc is also undergoing research and development regarding the use of coatings to seal blocks. EPAL authorizes the use of either timber blocks or certified composite blocks, according to Jens Lübbersmeyer of EPAL. Testing is undergone quarterly by an authorized testing institute. Composite blocks were first accepted by EPAL back in the 1990s.

The uniform size and quality of composite blocks aid automated pallet assembly. “Once customers try the composite block they are not inclined to go back (to timber), because most of them would tell you they get 7 or 8% more efficiency on their pallet manufacturing line,” Donohoe said. The use of blocks eliminates the operations and space needed for cutting blocks to length, cleaning up sawdust, and concern about kiln drying of material. The use of recycled wood fiber for blocks is also a positive sustainability story.

“In automatical lines composite blocks are better to handle because of the defined dimensions,” noted Lübbersmeyer. “The drying process of the whole pallet is shorter, IPPC goal is reached earlier and this reduces the costs of drying.

Eirebloc is increasingly broadening its international markets, having shipped to North America, Latin America, and Africa this year, in addition to European customers. Donohoe says the company currently has three North American customers. About 6 or 7 containers have been sent to the U.S. in the last few weeks, he said, with 3 or 4 more scheduled in the next couple of weeks. Destinations have included Baltimore, North Carolina, Chicago, and Quebec.

“We are a relatively small company but we are very flexible and look after the customer as best we can,” Donohoe said. “From our location in Ireland, we are the closest European producer to the North American market.”

As block pallet production continues to grow in the U.S., Donohoe sees that eventually there will have to be composite pallet block capacity in the U.S. “We wouldn’t be adverse to partnering up with someone at that point,” Donohoe concluded.

Located in Poland, DMD specializes in the production of composite wood blocks in accordance with the UIC 435-2 standard.

The ECOBLOKS ® plant is located in Finale Emilia in the Italian province of Modena. The company says its plant is the result of the most advanced technology in this sector, both in terms of production techniques and in terms of techniques for purifying emissions in the environment.

Eireblock began production in a new, purpose-built factory in Cork, Ireland in 2008. Further production expansions followed in 2010 and 2012, allowing an increasing range of products. The business represents the coming together of two highly successful players in the timber industry, whose combined activities, support the employment of over 300 people and brings over three decades of specialized knowledge, experience and entrepreneurial flair to the management of Eirebloc.

EUROBLOCK products are manufactured at five production sites in Germany and Holland. Three of them are integrated in sawmill plants; the other two are pure pallet block production sites. The production sites enable EUROBLOCK to offer the best possible logistical services to customers throughout Europe and overseas. The company also maintains ten sales offices to guarantee optimum cooperation.

Gbloc is based in Belgium. The G-Bloc pallet block consists of 100% post-consumer waste wood, carefully collected and prepared by sister company, Geldof Recycling. Geldof Recycling has over twenty years of experience in wood recycling and more than fifty years in wood materials in general.

NEPA is based in Poland.