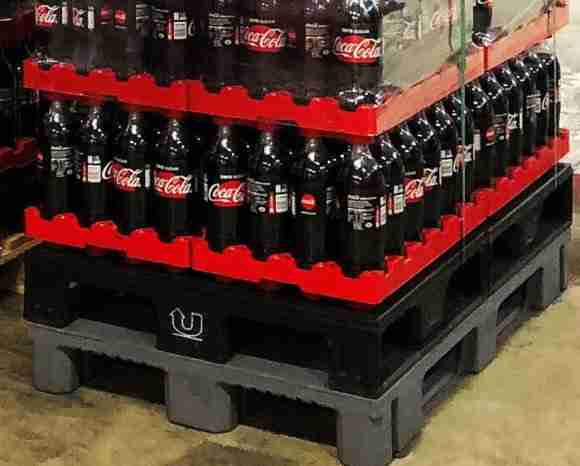 Coca-Cola European Partners joins Svenska Retursystem and switches from wooden pallets to the gray plastic full-sized pallet from Svenska Retursystem for all customers in Sweden. From February, the company starts distributing its beverage products on the “climate-smart return pallet.”

“Sustainability has been something that permeates our entire business for many years and we are continuously working on improvements in a number of areas,” says Anders Johansson at Coca-Cola European Partners Sweden. “Therefore, it feels quite right that we now move from wooden pallet to this more climate-smart return pallet.”

In February, Coca-Cola European Partners will set the production for Helpall gray (gray full-sized pallet) on the first of six production lines at the plant in Jordbro. During the year, they are gradually transferred to the remaining lines and in the autumn, all products produced in Jordbro will be delivered on the return pallet. In Jordbro, the company produces about 1.5 million liters of beverage every day and the new pallet will be delivered to over 200 customers around Sweden.

“With Helpall gray, Coca-Cola gets a high-quality pallet that not only reduces the industry’s CO2 emissions, it also provides a more healthy working environment for both their employees and customers,” says Cecilia Ratnér, Key Account Manager at Svenska Retursystem.

In order to gain greater control over all its cargo carriers, Coca-Cola has also decided to start using the digital asset control service SMART Pooling. By following its load carriers in an industry-wide platform, the company gets better control of its balances, more efficient administration and digitized routines.

In January 2019, Svenska Retursystem announced that Finland’s largest dairy, Valio Oy, had also begun using the Helpall gray for all customers in Sweden. Now, milk and yogurt from Finland will be transported to the Swedish market via the Swedish food industry’s common pallet return system.

“We work actively to streamline and environmentally adapt our food flows. With Helpall gray we get a high-quality pallet that is adapted for both the food industry and automation environments, says Mika Koski, Head of Logistics at Valio Sweden.”  Valio expects to use approximately 130,000 Helpall gray pallets in 2019, which means that the company will only save a weight saving of 1300 tons by changing load carriers from wood pallets.

“It is gratifying that Valio joins the return system. With Helpall gray, they get a cargo carrier that, in addition to reducing CO2 emissions, also gives both Valio’s own employees and their customers a more healthy working environment,” says Cecilia Ratner, Key Account Manager at Svenska Retursystem. By the end of May, all deliveries from Valio’s dairies in Finland to the Swedish market will take place at Helpall gray.

About Helpall gray
Helpall gray is standardized and adapted for automatic handling. It can withstand high stress, is friction-proof and works well in a freezing environment. It weighs 10 kg less than a corresponding wooden pallet. The life expectancy of the pallet is 15 years. It does not emit dust or wood chips, which provides a more healthy working environment for anyone who handles it throughout the flow.

About Coca-Cola European Sweden AB
Coca-Cola European Partners Sweden produces, distributes and sells non-alcoholic beverages on the Swedish market. Some of the brands are Coca-Cola, Fanta, Sprite, MER, fuzetea, Bonaqua, Powerade and Minute Maid. More than 700 people work at Coca-Cola in Sweden, of which about 500 work at the head office in Jordbro outside Stockholm. Here, about 1.5 million liters of beverage is produced every day. In Sweden, Coca-Cola was launched in 1953. The recipe for Coca-Cola was created in 1886 by pharmacist John S. Pemberton in Atlanta, USA. For more information, please visit www.coca-cola.se .

About Valio
Valio is Finland’s largest dairy company and has been in Sweden since 1994.Valio was the first in Sweden with lactose-free products and today has one of the market’s widest range.