You are here: Home / Featured Articles / Climate Change: The Impact on Agriculture and Costs of Adaptation

According to the Intergovernmental Panel on Climate Change’s (IPCC) Fifth Assessment Report, climate change is already adversely affecting global food production, and these impacts will only become more severe in the future. The report also finds that without significant adaptation, the costs of adapting to climate change could reach $280 billion per year by 2030. In this blog post, we will explore the impact of climate change on agriculture and discuss some of the costs associated with adapting to a changing climate. 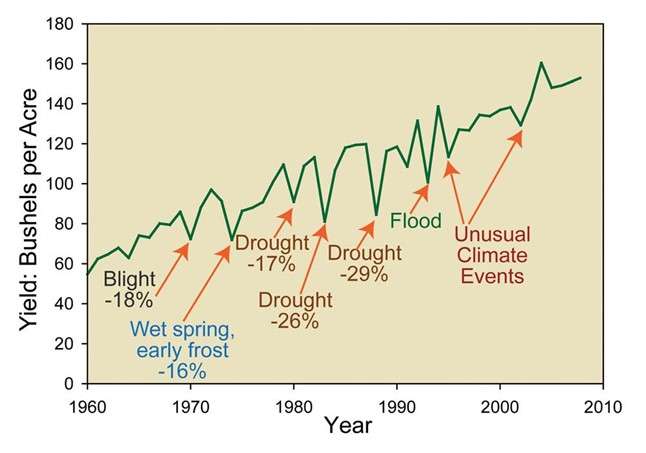 U.S. farms supply nearly 25% of all grains (such as wheat, corn, and rice) on the global market. Changes in temperature, atmospheric carbon dioxide (CO2), and the frequency and intensity of extreme weather could have major impacts on crop yields.

As the world’s climate continues to change, the agricultural industry is facing new challenges. Recent studies have shown that crop yields are likely to decline as a result of rising temperatures and changes in precipitation patterns. In some regions, such as the Mediterranean, drought conditions are expected to become more common, making it difficult for farmers to irrigate their crops. In other parts of the world, including parts of Africa and Asia, floods are expected to become more frequent and intense.

These extreme weather events can damage crops and lead to harvests that are smaller than expected. In addition, climate change is expected to cause shifts in the geographical ranges of many crop species. As a result, farmers may need to adapt their planting and harvesting schedules in order to ensure that their crops are not affected by these changes.

While the impacts of climate change on agriculture are often negative, there are also some potential positives. For example, rising temperatures could lengthen the growing season in some parts of the world, allowing farmers to grow more than one crop per year. In addition, as carbon dioxide levels rise, plants are able to convert more of this gas into energy through photosynthesis. This could lead to higher yields for some crop species. However, it is important to note that the increased levels of carbon dioxide in the atmosphere are also one of the main drivers of climate change, so this is not a long-term solution to the problem.

Impact of Heavy Equipment Use on Agricultural Greenhouse Gas Emissions

Agricultural tractor use has been identified as a significant source of greenhouse gas emissions. Tractors are a key piece of equipment on farms, and they are used for a variety of tasks such as plowing, planting, and harvesting. While tractor use is essential for efficient farm operations, the emissions generated by tractor engines can contribute to climate change. In fact, tractor use is responsible for approximately 5% of all agricultural greenhouse gas emissions.

There are a number of ways to reduce the impact of tractor use on the environment. For example, farm owners can invest in low-emissions tractor models or switch to alternative fuels such as biodiesel. You can find a list of tractors that consume biodiesel at www.tractorlibrary.com. Additionally, proper tractor maintenance can help to ensure that engines are running efficiently and minimizing emissions. By taking steps to reduce tractor emissions, farmers can help to protect the environment and ensure the long-term sustainability of their operations.

As the world’s climate changes, those changes are having an impact on the world’s livestock. In arid and semi-arid regions, pasture and rangeland productivity is being reduced by drought and increased temperatures. Those reductions in productivity lead to reductions in herd size and meat production. Additionally, as temperatures increase, heat stress on animals also increases leading to lower milk production, reduced fertility rates, and increased mortality rates. All of these impacts have bottom-line implications for farmers and ranchers who depend on livestock for their livelihoods.

In order to adapt to a changing climate, farmers and ranchers will need to adopt new management practices that help their animals cope with higher temperatures and more variable precipitation. Such practices might include providing more shade and access to water, altering grazing patterns, or changing breed selection. By proactively addressing the impacts of climate change, farmers and ranchers can help ensure the long-term viability of their operations.

Agricultural waste incineration is commonly used as a method of disposing of agricultural waste. However, there is a growing body of evidence that suggests that this practice may have a negative impact on the environment and human health. One of the main concerns is the release of pollutants into the air. These pollutants can include ash, fumes, and other particulate matter. They can settle on crops, contaminate water supplies, and be inhaled by humans. In addition, incineration can also release greenhouse gasses into the atmosphere, contributing to climate change. As a result, there is a need for further research into the potential impacts of agricultural waste incineration on the environment and human health.

Burning garbage is a widespread practice all around the world, and it’s a major source of air pollution. The emission of plastics into the environment creates a deadly cocktail of pollutants that harm both the planet and people who breathe polluted air. Black carbon is one such dangerous pollutant; its global warming potential is up to 5,000 times greater than carbon dioxide.

As agriculture becomes more difficult due to climate change, farmers will need to invest in new technologies and practices in order to adapt. These costs can be significant, and they are often borne by the farmers themselves. In some cases, governments may provide financial assistance to help cover the costs of adaptation. However, this assistance is often not enough, and it is not always available to all farmers who need it.

In addition, many of the adaptations that are needed in order to cope with climate change are long-term investments, such as planting trees or installing irrigation systems. This means that the upfront costs can be high, and it can take years for farmers to see a return on their investment.

The impacts of climate change on agriculture are already being felt by farmers around the world, and these impacts are expected to become more severe in the future. Adapting to a changing climate will require significant investment, and the costs of adaptation are often borne by the farmers themselves. In order to ensure that food production can continue in a changing climate, it is important that governments provide financial assistance to cover the costs of adaptation.

Climate change is already having an impact on agriculture, and those impacts are expected to increase in the future. The costs of adaptation can be significant, but there are a number of ways to reduce those costs. Governments need to provide financial assistance to cover the costs of adaptation, and farmers need to adopt new management practices that help their animals cope with higher temperatures and more variable precipitation.

Additionally, research is needed into the potential impacts of agricultural waste incineration on the environment and human health. Finally, steps should be taken to reduce tractor emissions by investing in low-emissions models or alternative fuels such as biodiesel. By taking these steps, we can help to protect the environment and ensure the long-term sustainability of our food supply.