You are here: Home / Featured Articles / Challenging Christmas in Store for Retailers

The 11th edition of the AFGC CHEP Retail Index suggests that retailers may be in for a challenging trading period this Christmas with year-on-year growth in retail sales slowing and a turnaround not expected in the remaining months of this year. 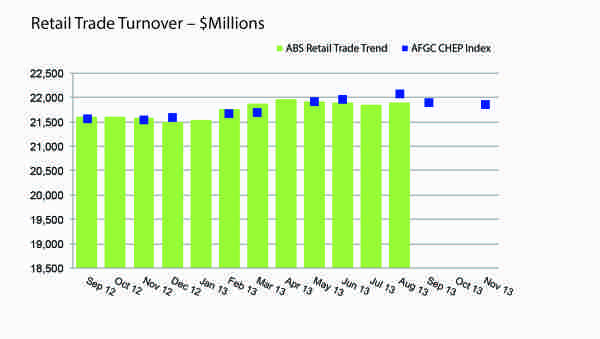 On a quarterly basis, year-on-year, the Index was 1.8 per cent higher in the September quarter than in the same period last year and growth is expected to further ease to 1.5 per cent in the December quarter 2013.

For the month of September the AFGC CHEP Retail Index indicates that the Australian Bureau of Statistics (ABS) is likely to report 1.9 per cent increase in year-on-year retail growth and turnover of $21.89 billion. Looking ahead, the Index forecasts November year-on-year growth at 1.5 per cent, with turnover dropping to $21.85 billion.

According to ABS data over the past year there has been varying performance within the retail sector; with discretionary spending under pressure, food retailers are performing the best.

Australian Food & Grocery Council (AFGC) CEO, Gary Dawson, said: “Retail sales growth is certainly underperforming against longer term trends, with the growth rate halving over the course of 2013. Food retailers are performing best with sales growth of around 3 per cent over the past year. Retailers will be hoping the recent improvement in consumer confidence will assist sales growth this Christmas.”

As the mining boom slows, retail performance is tightening, with ABS retail data showing sales growth in Western Australia has slowed from 10 per cent to below 2 per cent in the past year. In other states it has ranged between 1 and 3 per cent over the past year.

CHEP Australia & New Zealand President, Phillip Austin, said: “The AFGC CHEP Retail Index forecasts highlight the criticality of effective and efficient supply chains in maximising on shelf availability and promotion in the peak Christmas period, and we will be focusing our efforts on helping retailers have product where they need it, when they need it over what is traditionally the busiest retail period of the year.”

For a full set of results, see the AFGC CHEP Retail Index. The next Index will be released in late January 2014. To access more background information, visit www.afgc.org.au or www.chep.com.