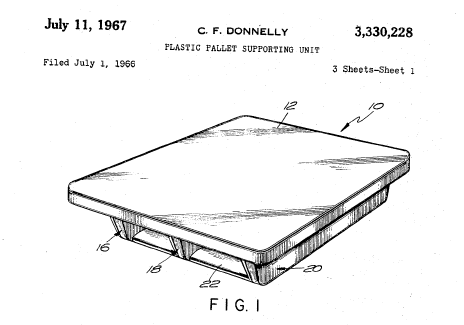 With well over 90 percent of the pallet market still dominated by wood pallets, and a surprisingly common lack of familiarity with the plastic pallet and its value proposition, it is easy for many to think of the plastic pallet as a newcomer to the marketplace. Truth be told, it has been an innovation now roughly 50 years in the making as it continues to evolve towards delivering better value than ever before to pallet users.

The exact beginning isn’t well documented. Plastic pallets had certainly emerged by the mid-1960s, as evidenced by patents of the day and evidence from trade publications of that time period. For example, in 1964, Modern Materials Handling Magazine made reference to fiberglass reinforced plastic pallet containers. Based on anecdotal information, Hartson Poland of PDQ Plastics, a New Jersey-based plastic pallet supplier, has speculated that they were initially crafted by small custom plastic shops in the years following World War II.

One of those early plastic shops was Robinson Industries, launched in 1947. It’s founder, Fred Robinson, had worked for Dow Chemical in the development of Styrofoam. By the 1950s, Robinson was manufacturing thermoformed products such as refrigerator door liners. According to the company website, the company was producing injection molded plastic pallets in the 1960s.

Patents from the early 1960s took a flexible approach, suggesting that pallets could be fabricated from plastic sheet as well as other materials, while patents totally focused on plastic as a pallet material plastic pallets were starting to be filed by the later half of the 1960s.  Patents emerged at this time for plastic pallets that could be manufactured through blow molding as well as injection molding processes.

In the case of New Jersey plastic pallet supplier PDQ Plastics, its early entry into the pallet market began with a conversation. “Leo, if you could make a durable pallet out of plastic that would really hold up, now that would be something,” Leo Nathans, founder of PDQ, was told by a General Motors buyer during a 1969 sales call pertaining to vacuum formed dunnage. Nathans developed the 40×48-inch “Super D” pallet, which went into production in the 1970s.  “True to his word,” according to PDQ Plastics, “the GM buyer had the Super D tested and it proved to be more durable than any other plastic pallet on the market.”

Plastic pallet producers of this era made use of a number of manufacturing approaches, including compression molding, thermoforming, rotational molding, and structural foam molding. In addition to PDQ Plastics, another early entrant was Engineered Polymers Corporation (EPC) of Mora, Minnesota, which is said to have built structural foam pallets in the late  1960s. In the early 1970s, there were numerous entrants into plastic pallet production. Armin Thermodynamics began producing plastic pallets by rotational molding in 1972 at its Broken Arrow, Oklahoma plant. In the same year. Menasha Corporation (ORBIS) first entered the plastic pallet market with the launch of the Convoy plastic pallet. Another early structural foam pallet producer was Horizon Plastics of Cobourg, Ontario, Canada. Early applications included automotive, food and pharmaceutical processing.

Of course, in the decades that have followed, developments continue to push the range of performance and value offered by plastic pallets in terms of such areas as increased stiffness, strength, and durability, reduced weight, designer compounds, better material handling equipment interface, food safety considerations, and other attributes. PackagingRevolution regularly reports on this ongoing commitment to product and process improvement.  Such changes have at least in part been driven by the demands of an ever-changing supply chain environment, one that will continue to shape the direction of plastic pallet design and services in the years to come.

Read the Other Breakthroughs in This Series

This ‘breakthrough in material handling’ article is the latest in this series, sponsored by PTM. One of today’s defining breakthroughs is PTM’s remarkably durable Ultra Pallet. With more than 37 years in the market, PTM, a FEMSA business unit, serves customers in different industries including food and beverage, automotive, and retail. For more information on PTM and the ULTRA PALLET, visit http://www.ptmsolutions.com/us/.