Brambles reported positive results for 1H 2015, and downplayed exposure resulting from the investments in oil and gas related pooling shortly before the collapse of oil prices.

“This first-half result reflects positive bottom-line leverage from sales revenue to Underlying Profit, despite the current cost challenges in North America,” commented Brambles’ CEO Tom Gorman. “We remain on track to deliver our near-term targets for the 2015 financial year while supporting our ongoing objectives to be a supply-chain partner of choice to our customers and deliver sustainable profitable growth for our shareholders.”

According to Gorman, the highlight of 1H15 was the performance of the Pallets business in Europe, where the delivery of operating efficiencies and sales mix improvements were particularly strong. This more than offset the impact of higher operating costs in North America, where plant costs continue to reflect the anticipated increased pallet damage that is resulting from improved asset utilisation, and where third-party freight costs are subject to heightened inflation as a result of regulatory changes and driver shortages.

“We are implementing self-funding pallet durability improvements in FY16, which we expect will reduce cost pressures associated with pallet damage,” Gorman stated. “However, transport inflation is likely to remain a challenge in the near term.” 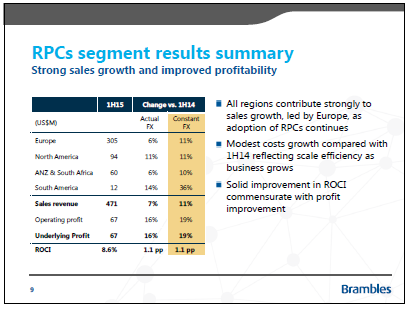 “In the RPCs business, we are pleased with our sales and profitability momentum as we continue to invest in the expansion of these operations. In our Containers segment, 1H15 delivered a strong result in IBCs and new business growth in Aerospace, but reflected specific challenges in the Australian and European Automotive markets. We are satisfied with the first four months’ contribution from Ferguson Group, which delivered a solid performance in line with our expectations amid challenging conditions in the oil and gas sector. We continue to focus on the strategically significant growth characteristics of this sector despite current industry pressures related to commodity prices.”

As much of the Ferguson Group activity involves servicing established oil and gas production locations and not exploration, it is less been less exposed to dropping oil prices. “It is planting a seed to build a business that we believe will be a substantial contributor to Bram­bles in the future,’’ Gorman commented of the Ferguson Group acquisition. “We made the acquisition for the next decade, not for the next quarter … This gives us the opportunity to continue what we want to do, which is grow this business.’’ 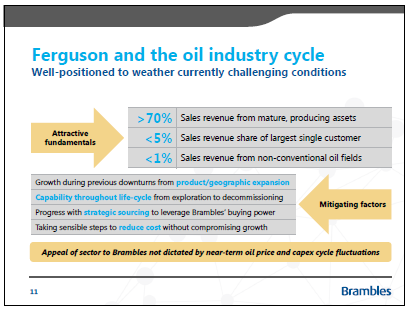 “We continue to assess a broad range of growth opportunities that are complementary to our long-term objectives,’ Gorman continued. “At the same time, we are executing the early stages of our business improvement program, One Better and, as a result, we are on track to deliver efficiencies that will both free up funding for innovation and drive a reduction in our ratio of overheads to sales over time.”

Brambles generated sales revenue of US$2,795 million in the six months ended 31 December 2014, up 5% (up 8% at constant currency). The difference between actual and constant-currency growth primarily reflected the impact of the stronger US dollar. Sales growth resulted from the continued delivery of the Group’s organic growth strategy in the Pallets, RPCs and Containers segments and the acquisition of Ferguson Group.

Cash Flow from Operations was US$269 million, down US$107 million, primarily reflecting the increased capital expenditure required to support expansion, in particular in the RPCs business.