You are here: Home / Pallets / Brambles delivers important ESG achievements in the first year of its 2025 sustainability targets

The global supply chain solutions leader achieved carbon neutrality for its own operations and launches its first pallet made of 100% post-consumer plastic on the path to a regenerative future. 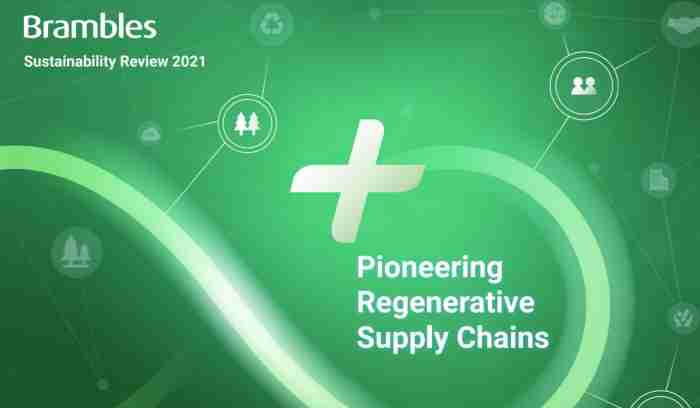 Sydney, Australia, 29 September 2021 – Brambles, the global supply chain solutions company operating in 60 countries through the CHEP brand, has released its annual Sustainability Review, which reports on its material Environmental, Social and Governance (ESG) issues and achievements for the financial year ending
30 June 2021.

In the words of Graham Chipchase, Brambles’ CEO, “In our new five-year sustainability strategy, Brambles charts a clear course towards a truly regenerative supply chain, with reuse, resilience, and regeneration as our core tenets. This pioneering vision has enabled our business to create value in an environment where change is an ongoing certainty. These early results show that our strategy is not just about words, but about actions. Every achievement is a concrete step closer to a net-positive future.”

Brambles’ ‘share and reuse’ model already offers many environmental savings to customers’ supply chains in comparison to single-use alternatives. In the last year, Brambles’ solutions have helped its customers achieve the following savings[4]:

Brambles is recognized as a global sustainability leader

Brambles’ sustainability credentials and performance continue to be recognized as world-leading. Barron’s Magazine, published by Dow Jones, named Brambles the second most sustainable company globally in 2021, and Corporate Knights rated the company 18th in their Global 100 list of most sustainable corporations in the world. MSCI awarded Brambles the maximum AAA rating in its ESG assessment and ranked the company in the top 4% of all companies assessed. Equally, the CDP gave the company an A- in its Forests submission.

The Group also achieved an overall A- rating in the Ellen MacArthur Foundation’s Circular Economy Assessment Tool, Circulytics, and is notably one of the major private sector partners instrumental in developing the tool and promoting the many business benefits of transitioning from a linear to a circular model.

[1] Scope 1 carbon emissions refers to direct emissions generated from the burning of fuel.

[2] Scope 2 refers to indirect emissions resulting from the production of electricity that is purchased.

[3] Brambles will provide an update on its commitment to a Science-Based Target, which addresses emissions in our supply chain, predominantly third-party transport and subcontractors’ operations and new timber for pallets, in the lead up to the COP26 Climate talks in November.