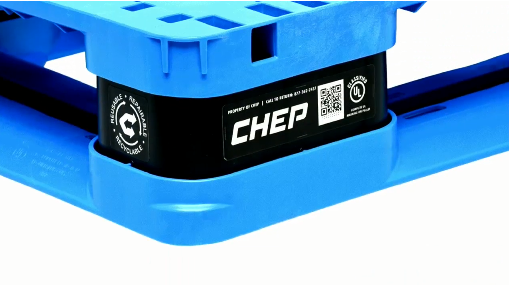 “At their annual Supplier event in September 2019, Costco leadership shared their vision, by asking their vendors to take a serious look at changing from their ‘normal’ heavier wooden pallets to lighter and more efficient plastic pallets.” (Source: iGPS)

In the wake of Costco’s plastic pallet announcement in September 2019 and the CHEP plastic pallet trials that have followed, the pooler has been guarded in discussing them publicly. That has been the case, at least, until its September 14, 2021 investor presentation.

Currently, iGPS is the only approved pooler to commercially offer plastic pallets to Costco suppliers in North America.

A lot on the line

To be sure, there is a lot on the line. Costco accounts for around 10% of CHEP North America’s volume. And as Laura Nador, Laura Nador, President CHEP North America, pointed out at the briefing, the two companies have enjoyed a mutually successful 20-year relationship. She noted that Costco’s growth has consistently outpaced other big-box providers and has been a “key driver of new business wins” for CHEP.

The plastic pallet initiative also has been a keen topic of interest to investors regarding how such a move would impact the CHEP business. Costco has a reputation as an innovator when it comes to pallets, and perhaps it is a lead indicator of a more broad future trend. After all, it was an early trendsetter in transitioning from pallet exchange to rental, and then from stringer pallets to block style units.

Moving away from pallet exchange addressed safety, not to mention product and equipment damage, while the move to block pallets drove efficiency, allowing warehouse material handlers to move more unit loads at a time. Now it is looking to plastic to further drive supply chain efficiencies and member value. Naturally, investors are interested in what a shift to plastic would look like for a pooler that is so highly invested in wood pallets and the infrastructure to support them.

Costco full pallet supply chain is different than others

The cross-dock depot is empty at the start of the day, and after all of the loads are cross-docked, the depot finishes the day empty as well. “There is no long-term storage or racking,” she said. Costco has also invested in outbound RFID readers. The speed and control of the Costco supply chain “give us enough confidence to have engaged in this possess…so far, and to advance into this pilot validation phase,” she said.

The proposed model would see a majority of plastic pallets repositioned directly from Costco to product manufacturers, thus avoiding the freight and labor involved in sending all empty pallets back to the CHEP depot for processing. The company estimates that only 25% of pallets would be returned to the depot, mainly to support pallet network rebalancing. The expected damage rate is in the “single digits.” This model is enabled by Costco’s agreement to inspect and sort the CHEP pallets at their depots.

“Another key difference with a plastic pallet model is the introduction and piloting of a digital operating model,” Nador stated. “This leverages Costco’s RFID network and integrates it with ours to provide pilot visibility throughout the Costco supply chain.” Each plastic pallet is uniquely serialized with RFID, and the CHEP service center network has also been outfitted with the required technology and processes to support the new model.

“This model and the data that it yields will provide us and our customers with greater visibility of what is happening with the pallets in the entire Costco supply chain,” Nador added.

Because CHEP pallets can move under load to Costco customers, a new deposit system is also being tested. The goal is to drive customer accountability for pallet loss for members and small businesses that buy at Costco and to compensate CHEP for those asset losses. 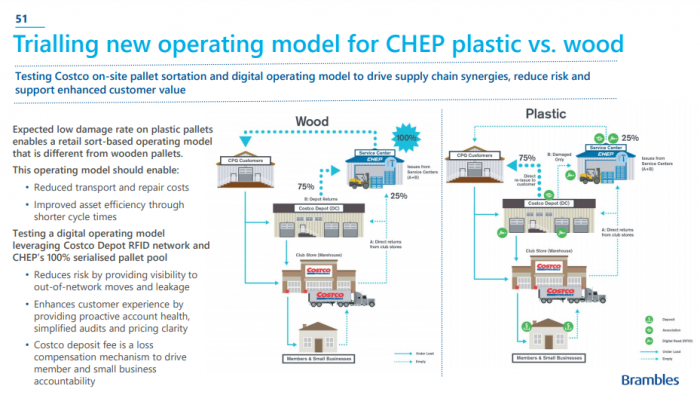 The CHEP modular plastic pallet is UL approved for fire safety and ISO 8611 rated for loads up to 2800 pounds. Nador said that the pallet has gone through many iterations and modifications “to ensure that we were putting the best plastic pallet possible in the market.”

Sustainability was key from the beginning, she emphasized. “We wanted to ensure that our pilot is able to support our customers for many years without having to constantly regrind into new assets. So we innovated and we developed a modular solution that is easily repairable.”

“This repairability not only supports our business model, but it also shows that we stay true to our belief of creating environmentally friendly, sustainable supply chains,” she continued. “In fact, when you compare a wooden pallet with a plastic pallet in the Costco supply chain, the life cycle analysis results are the same.” The sustainability is driven by the durability and repairability of the pallet, as well as through the strong pallet control in the Costco supply chain. Also, avoidance of shipping a majority of pallets back through the CHEP service center network also supports the sustainability case.

The pallet IP and tooling are owned entirely by CHEP.

“Our teams collaborated, tested, and learned together…,” Nador said. “That real-life Costco testing and our own pilot test drive data gives us the confidence that we are taking a durable and sustainable product to the market.”

The test has included customers from a wide range of product categories, involving customers who account for roughly 30% of total volume in the Costco supply chain, and including some of Costco’s largest vendors.

“The value of the plastic pallet is being recognized early on through our achievement of pricing premiums in the pilot and the positive customer feedback on the pallet’s performance,” Nador said. She noted that control will remain a key focus throughout the duration of the trial. “As we know controls to prevent loss and protect our assets are the most important variable for long-term success.

Pallet control is strengthened by “strong language clauses” in contracts, a digital operating model and proactive engagement across an entire customer base, supported by customer audits. Based on feedback and data, CHEP intends to make a decision on whether to commercialize a plastic pallet for Costco in the second half of fiscal 2022.

Joaquin Gil, Brambles Senior Vice President of Financial Planning & Analysis, noted that, given its experience, CHEP has a very clear understanding of the key variables that drive the economics of plastic pallets. “It is important to note the loss rate in anything but low loss rate lanes would require a price premium that would make plastic pallets commercially unviable.

“This is why we believe there are currently limited use cases where high-cost plastic pallets are commercially feasible for other North American retailer supply chains,” he said, noting the importance of RFID in the Costco pilot, and the rapid product cycle time, which can again offset some of the price premium required.

How the decision will be made

Gill stated that the decision on whether to proceed with the investment in Costco plastic pallet will be based on three decision criteria: expected financial returns at full implementation, Costco’s commitment to product and operational requirements, and finally, the acceptance of plastic pallets, including CHEP commercial terms and conditions, by Costco suppliers. The latter, according to Gil, includes acceptance of premium pricing to wood and compensation charges (for loss).

If CHEP rolls out plastic pallets to Costco, at an estimated cost between $450 and $700 million, then existing wood pallets used to support Costco suppliers would be gradually reallocated to non-Costco supply chains over the course of the three-year conversion, saving the company roughly $150 to $180 million in wood pallet purchases.

But CHEP emphasizes that it will only proceed if a plastic pallet launch for Costco makes financial sense. “We are proud of our long and mutually successful partnership with Costco,” said Graham Chipchase, Brambles CEO. “But while we strive to meet our customers’ needs, it’s also important that we continue with a disciplined approach to capital allocation.

“The results from the pilot will provide key inputs to our decision, but this will be in the second half of fiscal 22.”

In the question period, Chipchase emphasized that CHEP didn’t intend to succumb to downward price pressure or a price war for accounts.  “We wouldn’t intend this to be a competitive bid position on pricing,” he concluded. “We are going in with what made sense for us. And if that doesn’t make sense for us, we won’t be participating.”