You are here: Home / Announcements / Brambles Announces Its 2016 Sustainability Review 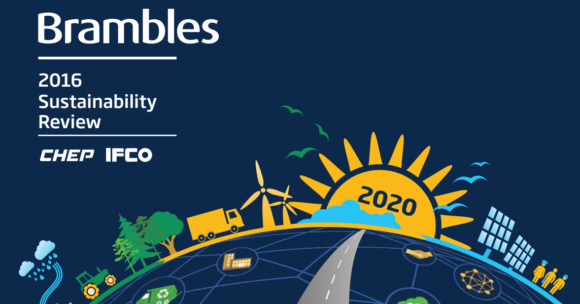 Brambles, the global supply-chain logistics company operating in more than 60 countries, primarily through the CHEP and IFCO brands, has published its Sustainability Review for the 2016 financial year (FY16). The Review includes updates on Brambles’ 2020 Sustainability Goals, which are based on the Company’s Better Business, Better Communities, Better Planet sustainability framework and are closely aligned with the United Nations’ Sustainable Development Goals (SDGs).

Examples of Brambles’ progress and achievements reported in the 2016 Sustainability Review include:

Better Business – Improving the supply chains in which Brambles operates.

Brambles carries on a circular business model, specialising in the sharing and reuse of unit load equipment, including more than 550 million pallets, crates and containers. In FY16, the application of this business model is reported to have saved 1.4 million trees, 2.3 million metric tonnes of CO2 emissions and 1.3 million metric tonnes of solid waste. Brambles also collaborated with 177 customers to remove 35 million empty kilometers from their combined transport distances.

Brambles companies have been recognised with multiple industry awards for these and related initiatives, including a Gold award from EcoVadis, which specialises in supplier sustainability analysis, and a 2015 Corporate Responsibility and Sustainability Supplier Award from Coca Cola Enterprises. In 2016, Brambles was also listed on the World Dow Jones Sustainability Index (DJSI) for the third consecutive year and was ranked second in its industry category.

In FY16, Brambles procured 97.3% of its timber from certified sources. In a pioneering example of upcycling, Brambles produced a reusable plastic half pallet made from 100% mixed consumer plastic waste. Brambles also eliminated plastic waste and raw material costs by recycling 27,018 kilograms of damaged plastic products into new Brambles plastic pallets and crates. The company helped tackle climate change by cutting its carbon emissions per unit by 6.5% and by ensuring that 15% of the Company’s electricity consumed came from renewable sources. The Consumer Goods Forum, of which Brambles is a member, included the company in the best practice booklet it distributed at the COP21 climate change meeting in Paris in November 2015.

Better Communities – Positively contributing to the communities in which Brambles operates.

All permanent Brambles, IFCO, CHEP Pallets and CHEP Containers employees have access to three days of paid volunteer leave every year. In FY16, employees volunteered more than 17,200 hours, which is a 37% increase on FY15. The volunteering was spread across more than 300 different community organisations including Food Banks and Enactus, a community of student, academic and business leaders committed to using the power of entrepreneurial action to shape a more sustainable world.

Juan José Freijo, Global Head of Sustainability at Brambles, said: “Our business model is inherently based on the principles of the circular economy, which aims to keep products, components and materials at their highest utility and value at all times.

“This has been a fantastic year for Brambles. We have had positive progress towards all our 2020 goals and have established a solid foundation for our sustainability actions over the next five years. Our sustainable business model, our partnership with key players throughout the supply chain and the passion and engagement of our employees have been hallmarks of the achievement of these results. We are dedicated to working with our partners and customers, to promote circular business practices and their benefits for the future.”