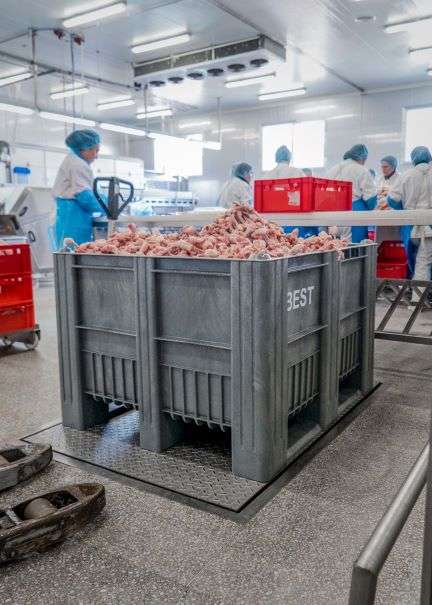 The CB3 pallet box, a combination of pallet and box made by Craemer, is proving to be very robust, even at high trip rates. A large German-Polish meat processing company discovered this plastic pallet box by chance. It left such a good impression that the company immediately placed an order with the Craemer group’s German headquarters via its representative office in Poland.

Besides being durable, these resistant boxes must also meet the highest hygiene requirements of the kebab producer. They are used to transport animal by-products that are converted into animal feed. After successful test runs, the company is now gradually replacing its entire stock of containers from a competing company whose boxes were previously used and have proven inappropriate for this demanding task.

Boasting over 60 years of experience in plastics processing, Craemer is one of the world’s leading manufacturers of durable logistics and waste disposal solutions. Established in 1912 and now in its fifth generation, this family-owned company is based in Germany, with three other European plants. As a further business field, plastics processing was added to metal processing at the end of the 1950s. Craemer initially manufactured large plastic injection mold containers.

In 1967, the Group obtained a patent for the world’s first one-piece pallet. The portfolio now comprises plastic pallets for a wide variety of requirements as well as a wide range of transport and storage containers – from stacking boxes, round containers, and tubs to pallet boxes.

All Craemer products are made of high-quality polyethylene, fulfilling the most stringent requirements and excelling with their tried and tested quality. Since 2014, the Craemer Group has been operating a representative office in Poland named Craemer GmbH Przedstawicielstwo w Polsce. The daily business consists in the sales promotion of Craemer pallets or pallet boxes as well as plastic containers for storage and transport.

A growing company with booming exports

Established in 2008 as a German-Polish joint venture, the kebab company produces various types of doner kebab – poultry, beef, and veal, depending on the customer’s wishes. The founders have years of experience with this grilled meat dish that originally comes from Turkey and has taken most of Europe and half of the world’s countries by storm. Approved for intra-community trade, the manufacturer also cooperates with many member countries of the European Union. The company – which strives for the top position in the domestic as well as in the European market – is booming and growing fast. In western Poland, a new production facility has now been opened for processing chicken meat into kebab dishes which are then exported to the Central and Western European markets.

“Our new customer came across Craemer and their plastic pallet boxes in an astonishing way,” explained Arkadiusz Michal Wissuwa, Area Sales Manager Poland. “Another Polish meat processor, whose category 3 abattoir waste goes into animal feed, had already been using several hundred of our light grey CB3 for this purpose. This company was one of our first CB3 customers in Poland, by the way.” 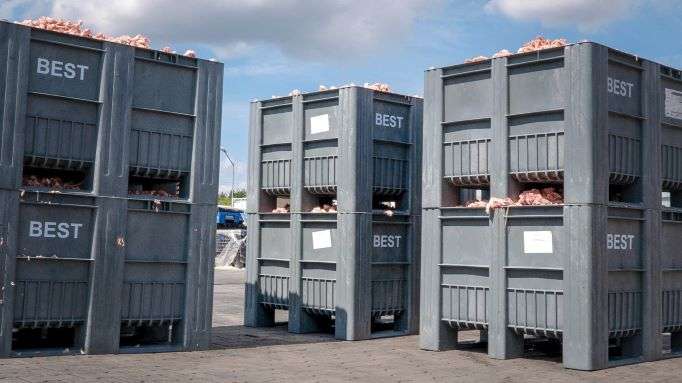 “This customer then systematically replaced the boxes they were using at the time with our CB3,” Arkadiusz Michal Wissuwa continued. “Because the pallet boxes are returned empty from the animal feed manufacturer to the meat processing companies every time, sometimes boxes accidentally end up not with the original owner but with other producers of abattoir waste.” This is how this kebab producer came across Craemer boxes. “They were looking for very stable and hygienic pallet boxes because the competitor’s boxes they had been using broke quickly,” Wissuwa explained. “They soon realised that the CB3 box is much better, very stable and durable, even at high trip rates.”

On the new customer’s part, the requirements concerning the boxes are also very demanding. They are filled and transported over 100 kilometers to the next processing site, where they are emptied. The Craemer pallet boxes proved to withstand these challenges without incident. In contrast, the competitor’s boxes broke quickly during usage.

Since the market launch of the Craemer pallet box CB3 in 2017, the stable combination of pallet and box made of food-safe polyethylene has been a success. The CB3 box with the industrial pallet dimension of 1,200 by 1,000 millimeters and a height of 720 millimeters is made in one piece with three longitudinal runners and has a capacity of 610 liters.

Thanks to its sturdy construction and features, it offers many advantages for daily operations:

Use of CB3 boxes tried and tested in the food industry

Craemer pallet boxes are mainly used in the food processing industry, especially for transporting and storing meat, as well as poultry and fish. Numerous other industries profit from the advantages of CB3, including the waste disposal and trade sector. The German-Polish kebab producer needed reliable transport containers in its new plant to transport abattoir waste – chicken bones from its production of grilled poultry – to an animal feed manufacturer. Category 3 waste (animal by-products; ABPs – not suitable for human consumption with the lowest risk level) is subject to high safety and hygiene requirements, even though it may only be processed as ingredients in animal feeds.

“The CB3 pallet box fully meets the criteria of the kebab producer and also fulfils the legally defined hygiene regulations, of course,” confirmed Arkadiusz Michal Wissuwa, responsible for the sale of Craemer products in western Poland. The material prevents chemical reactions when it gets into contact with fats and acids, which is an essential quality feature given the often very fatty animal by-products. Thanks to the smooth inner surfaces, CB3 boxes can be easily cleaned using high pressure with hot water and food-safe chemicals.

Since March 2022, the German-Polish company has been using a few dozen CB3 boxes in basalt grey, one of seven standard colors in addition to optional special colors. To distinguish deliveries from different companies, each pallet box was hot-printed with the word “BEST” to identify the owner. “This imprint is appropriate. Our pallet boxes are simply the best,” says the sales expert from Craemer’s representative office in Poland. Since the CB3 pallet box has continued to prove itself as a safe and sturdy solution, the second delivery already took place in autumn 2022. In the future, the “best” solution will systematically replace the former boxes until the poultry kebab producer works exclusively with the reliable CB3.