“…the drivers are an ambassador for any business as they are the frontline and, as such, they see things that others don’t, for example when equipment they expect to pick-up isn’t there.” 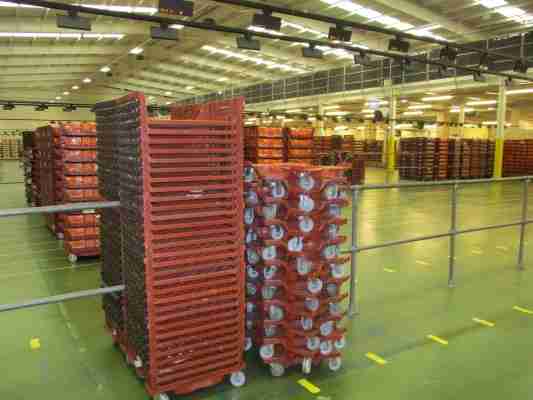 United Kingdom – September 10, 2020 – Bakers Basco, the membership scheme set up by five of the UK’s largest plant bakers to provide and manage an industry-wide bakery equipment solution, is taking another step in its efforts to recover missing equipment by extending its awareness campaign direct to the delivery drivers responsible for distributing bread and other morning goods up and down the country every day.

Since it was formed in 2006 by Hovis, Warburtons, Allied Bakeries, Frank Roberts & Sons and Fine Lady Bakeries, Bakers Basco’s operations and recovery teams have worked tirelessly to crack down on the potential abuse and misuse across its equipment pool, which includes four million plastic bread baskets and associated wheeled dollies.

The driver briefings initiative, which takes place regularly across all of the shareholders’ sites, is aimed at raising awareness of Bakers Basco’s work from both an operational and recovery perspective. By engaging directly with the drivers, who often work on different shifts and different routes from one day to the next, the effort is intended to encourage drivers to report any suspicious activity that will help the Bakers Basco’s recovery process.

“In order to do their jobs effectively, in addition to their own investigations, our recovery teams rely on intelligence gathered from the general public and other businesses who report any instances of abuse via our dedicated recovery hotline (08000327323),” said Paul Empson, General Manager at Bakers Basco. “But at the same time, the drivers are an ambassador for any business as they are the frontline and, as such, they see things that others don’t, for example when equipment they expect to pick-up isn’t there. It’s just another route for us to take in helping raise awareness of what Bakers Basco does and how they can help us generate leads which, ultimately, can help us stamp out this activity.”

Although it is designed for the sole purpose of transporting bread safely, cost-effectively and in an environmentally-friendly way, the equipment is often diverted out of the supply chain, either unlawfully by companies taking it and using it for their own gain, or simply due to a build-up at stores which haven’t yet been collected. Either way, it can cause significant disruption to the supply chain operations delivering bread from the bakery and into stores.

“The people on the ground often have a far better idea of what’s going on and that’s why, to date, this initiative has already generated a lot of leads,” added Empson. “We already rely on GPS tracking technology to help track down equipment where we suspect unlawful activity is taking place but the drivers themselves should also be aware of the bigger picture and these one-to-one briefings do just that.”

Bakers Basco recently reported a 112% year-on-year increase in visits made by its dedicated recovery team to reclaim equipment which has been delayed, lost or stolen. But despite having reduced the attrition rate of bread baskets across the industry from double figures to under 10%, the issue is still rife across the baking industry, particularly when unscrupulous recyclers and scrap yards take it to be ‘chipped’ or reduced to raw material for resale.