The latest edition of the Australian Food and Grocery Council (AFGC) CHEP Retail Index shows the recent trend for declining growth in retail sales continued through the June quarter but predicts the rate of year-on-year growth will increase by the September quarter. 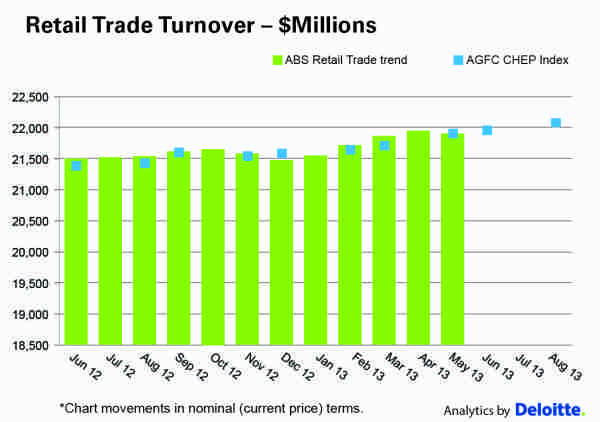 For the month of June, the Index indicates that the Australian Bureau of Statistics (ABS) will report year-on-year retail trade growth of 2.5 per cent and turnover of $21.9 billion. The Index forecasts August year-on-year growth will be 2.7 per cent, with turnover increasing to $22 billion. 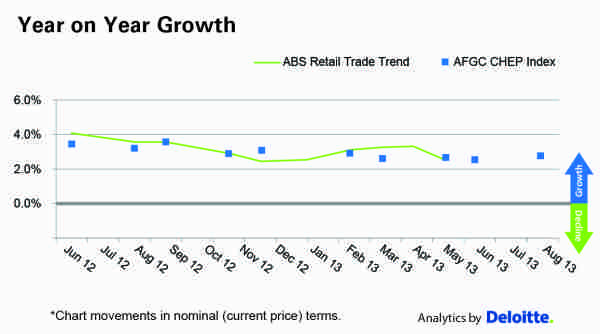 Recent ABS statistics have shown improving year-on-year growth in food and grocery retail compared with overall retail sales growth. Results published by the ABS for the month of May show food and grocery retail sales grew by 4.2 per cent over the past year. In contrast, sales at clothing retailers were flat, sales at department stores contracted, and household goods retailers posted growth of about 1 per cent.

CHEP Australia & New Zealand President, Phillip Austin, said: “CHEP’s data insights support the view that the Australian economic landscape and retail environment are today something of a patchwork. The predicted retail trade growth to August 2013, as well as inventory and consumer confidence indicators, suggest more of the same in the first quarter of the 2014 financial year.”

The next AFGC CHEP Retail Index will be released in late October 2013. To read the Index and access more background information, visit www.afgc.org.au or www.chep.com.