You are here: Home / Announcements / Arla switches to climate-smart pallet 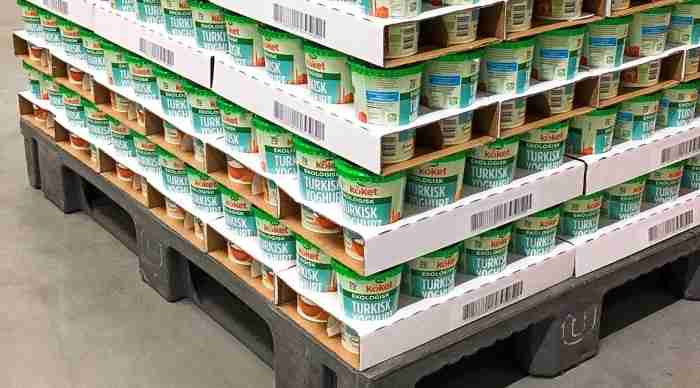 In October, Arla Foods will begin the conversion of its entire production in Sweden to the Svenska Retursystem (SRS) reusable plastic half pallet. It is estimated that there are about 650,000 pallets per year in Arla’s external flows and just as many in the internal flows.

“The climate issue is the biggest challenge of our time and we at Arla have very high ambitions for our environmental work,” stated Malin Leander, logistics director at Arla Sweden. “By changing to a return pallet, we expect to reduce our climate footprint by 50 tonnes of CO2e per year.” Arla Foods is an international dairy company and a cooperative association owned by 10,300 dairy farmers from Sweden, Denmark, Germany, the UK, Belgium, Luxembourg and the Netherlands. The company is one of the strongest players in the international dairy world with a wide range of dairy products of the highest quality. It is also the world’s largest producer of organic dairy products.

The full-size SRS plastic pallet has a lifespan of 15 years and can be reused more than 100 times. It generates 10 percent lower carbon dioxide emissions than the corresponding wooden pallets (see comments below from SRS). It does not emit dust or wood chips and it weighs 10 kg less than a wooden pallet, which offers a more healthy working environment.

“We are pleased that Arla sees the benefits of our pallets,” said Cecilia Ratnér, Key Account Manager at Svenska Retursystem. “By changing Arla to the SRS half pallet, they get a climate-smart load carrier that gives both their own employees and their customers healthier working conditions.”

Arla has already been a user of SRS RPCs. In 2018, they used three million of them to distribute cheese in the Swedish market. In this way, they saved about 665 tonnes of CO2e, compared to if they were distributed in disposable packaging, according to SRS.

SRS commented that the environmental impact values stated above are based on the traditional LCA method, which shows that the SRS half pallet gives 10 percent lower carbon dioxide emissions compared to the corresponding wood pallet. If the newer GWPbio method is used in its place, which takes into account the time aspects and nature’s absorption of carbon dioxide, the pallets give 61% lower emissions. * Read more (in Swedish) about the life cycle analyzes for SRS return boxes and return pallets.