ALDI Australia is the first to use CHEP’s Gen 3 crate family which was developed in consultation with the retailer and is positioned to become the industry standard fresh produce solution, delivering unprecedented efficiencies along the supply chain, from farm through to the retail store.

“The Gen 3 crate is a one touch solution that will create efficiencies within the ALDI fresh produce supply chain, and in the future will streamline processes and systems for our suppliers given it has the capacity to be a whole-of-industry solution,” Mr. Jakupec said.

“The new crate allows products to be packed directly on farm before being delivered to our warehouses and subsequently to stores, which reduces the amount of repacking and speeds up the process. The crate design allows it to fit directly into our new fresh produce display on the shop floor, which means less product handling and therefore a higher level of product quality. Instead of store staff having to pack products on tables within the produce area, the majority of products will remain displayed within the crates which will assist with better product rotation and minimise damage to the products through less handling.” 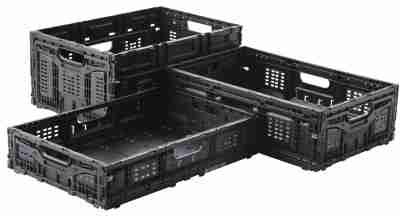 With an existing pool of more than four million crates, and a 10-year history supplying HACCP certified reusable plastic crates to the Australian fresh produce supply chain, CHEP is confident this new innovation will deliver ALDI and the industry increased value, efficiency and sustainability.

The new crate features globally best-in-class latching technology and is fully compatible with the previous generation crate and existing infrastructure.

CHEP Australia and New Zealand President, Phillip Austin said “The Gen 3 crate family is a game changer. It’s not only an industry-wide solution, it offers world leading return logistics; with a folded height of 25mm, the Gen 3 outperforms all other crates on the market by up to 29 per cent.”

Both growers and retailers will benefit from the reduced fold down height with up to 29 per cent more crates fitting into a truckload than previous generation crates, meaning fewer trucks will be required to transport an equivalent number of crates when empty.

The Gen 3 crate family also offers sustainability benefits, at least equivalent to that of the previous generation crate. An independent lifecycle analysis of CHEP’s reusable plastic crate system conducted by RMIT in 2010 showed that compared with a single-use corrugated cardboard system, CHEP crates produced 70 per cent less greenhouse gas emissions, used 85 per cent less water and produced 95 per cent less solid waste to landfill even if the cardboard was recycled.

CHEP is Australia’s leading provider of pooled reusable plastic crates (RPCs), which are used primarily to transport fresh produce from growers to leading grocery retailers. CHEP has provided pooled RPCs to its main customer, Woolworths, since 2000. In 2009, Woolworths moved to CHEP’s Gen 2 crate.

The Gen 3 Crate Features and Benefits

The Gen 3 crate comes in three sizes (22 litre; 34 litre and 48 litre), is compatible with the previous version crate and comes with new ‘lift lock’ handles, which enable faster, easier assembly and fold-down for improved efficiency and safety.