You are here: Home / Pallets / A History of Pallets During World War 2: A Call to Action

While the techniques of palletized handling had begun to take shape with the evolution of pallets during the 1920s and 1930s, the practice was not yet widely used in commerce. There had been little impetus for more widespread introduction of palletized handling with forklift trucks. The surplus of labor in the work force, in combination with the lack of capital available for investment in facilities and equipment effectively put palletisation onto the back burner. This was especially true for the military. 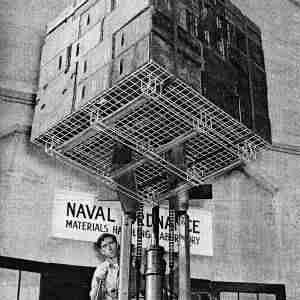 In spite of these conditions, some progress had been made in the private sector. Pallets and forklifts had been introduced at a number of “leading edge” applications by the beginning of the 1940s. At the time the war began for the U.S. in 1941, 25,000 forklift trucks were estimated to be in use. Correspondingly, pallet production was also still in its early stages of development. Pallets were typically manufactured locally, in small numbers. Demand for pallets could only grow as lift trucks became more widespread. During the course of World War 2, that is exactly what happened.

As the military build-up began in 1940, pallets were seldom employed, and packing cribs were usually poorly constructed. Army Quartermaster depots of the day were largely dependent upon hand operated equipment. Unloading, storing, stocking and loading operations were largely performed without powered equipment, although a few sites had electric elevator stackers. Even major depots such as those at Philadelphia, Jeffersonville, Chicago and Columbus had very few power operated machines. The result was poor storage efficiency, with goods not stacked as high as they might have been on pallets. The handling of goods was slow and inefficient. While such limitations were not a serious concern for the small peacetime Army of the 1930s, they presented a far greater dilemma as the 1940s unfolded.

The full use of pallets by the military required the purchase of powered equipment to handle them. The acquisition and integration of such equipment presented many other obstacles. However, with war looming in 1941, the Office of the Quartermaster General (OQMG) recognized the necessity of introducing better handling methods in its depots throughout the country. Labor would become scarce, and supply orders would have to be filled promptly.

To address this concern, the Depot Operations Branch of OQMG launched studies of material handling equipment being used in industry with the goal of implementing the best practices and equipment in Quartermaster depots and other supply installations. Representatives inspected industrial plants using state-of-the-art handling equipment. They observed that forklift trucks and pallets, along with tractors, trailers, cranes and conveyors, were becoming more widely used by large factories, warehouses, shipyards and transportation terminals. The representatives came to the conclusion that forklift trucks and pallets clearly comprised the most efficient system available for handling subsistence supplies as well as other packaged or strapped commodities handled by the Quartermaster Corps. These conclusions were supported by tests conducted at the Fort Wayne Quartermaster Depot in July 1941.

As a result of these initiatives, funds were eventually released in September 1941 by the War Production Board (WPB) for the purchase of forklifts and other handling equipment. With the money finally available, it was then suddenly determined that forklift manufacturing capacity was inadequate to fill the barrage of orders placed by the Army and the Navy for this equipment. There was a subsequent scramble to convert some existing industrial plants to forklift manufacture. In addition, coordination between various government departments hindered progress. The use of steel and other scarce materials was prioritized as to its importance to the war effort. With forklift trucks originally classified as luxury items, materials for forklifts were not given top priority by the WPB. Quartermaster authorities argued that while forklift trucks may have been a luxury in peacetime, the short supply of labor and warehouse space in wartime urgently required the full use of equipment to save time, space and labor requirements. This argument eventually won acceptance, paving the way for increased lift truck production.

Shortages of forklift trucks continued through most of 1942 and early 1943, when half of lift truck production was allocated to overseas locations. This resulted in an extreme shortage of machines for Quartermaster depots in the U.S. Zone of the Interior, as well as a poor allocation of equipment. This situation occurred because equipment was dispatched based on urgency of need rather than specific performance requirements of a site. For example, 3,000 or 4,000 pound rated lift trucks with a 144 inch mast requested for a heavy duty application often ended up in facilities that had requested 2000 pound trucks with 108 inch masts for lighter service or lower clearance for vehicle unloading.