You are here: Home / Pallets / 3 Recent Innovations That Can Make Pallet Jobs Easier 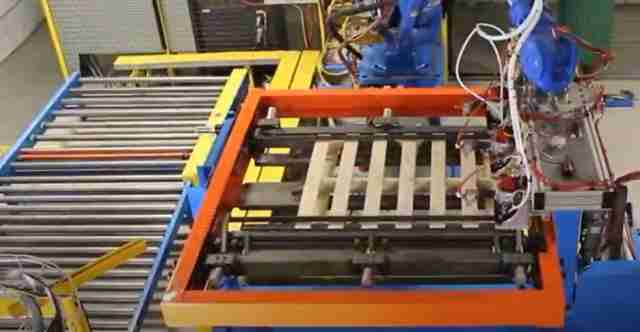 While the labor market remains challenging for manufacturing companies, filling jobs that require heavy and/or repetitive lifting poses particular difficulties. It is hard to find and retain employees willing to do the hard work required in demanding sectors such as pallet manufacturing and recycling. The good news, however, is that new technologies are helping to lighten the load. Here are three recent innovations that may prove useful for making jobs easier, and thereby expand employment opportunities for a more diverse range of job candidates.

1     Robotics for pallet sorting and stacking, dismantling, repair and assembly

Robots are increasingly making their way into pallet plants, and they are being used to perform a variety of tasks, ranging from pallet assembly and repair to stacking and dismantling.

Dismantling is often considered the toughest job in a pallet recycling operation. The Robotic Dismantler from Alliance Automation, however, takes the strain out of the job by picking up the pallet robotically and running it through the horizontal bandsaw dismantler. While some manual labor is still required on the front end to prepare pallets for the robot, overall, exertion is substantially reduced. Since the first Robotic Dismantlers were shipped, overall cycle time has been dramatically reduced, blade life has improved, and the overall mix of pallets that can be processed has expanded to encompass pretty much anything in the 30×30 to 60×60 footprint range.

If you are having trouble recruiting and keeping your people, don’t get mad. Get automated

Robotics are also used for other pallet plant operations, including repair, another tough job. As Yaskawa, a robotics manufacturer, notes, robots can eliminate the strain of lifting 60-70 lb pallets, as well as the use of tiger saws and nailing tools, thus shifting this dangerous work to robots. Robotic adoption is more mature in Europe than in the United States. CHEP, for example, reported in 2018 that it had 40 pallet repair robots operating in Europe and 4 in the U.S. Robots are commonly seen in European operations for stacking pallets, placing mats for block pallet production, or for handling and making cuts in sheets for wood packaging operations.

Robotic pallet assembly is also ideal for shorter production runs, where changeover time can be reduced from hours to just 5 minutes. As one vendor notes, “fixed machinery still makes the most sense when producing high volumes of the same pallet type and size. The biggest ROI benefits come from the robotic system’s ability to produce a variety of pallet types with minimal downtime due to changeover.”

The Urban Sawmill, also produced by Alliance Automation, is a mechanized system designed to eliminate the substantial labor required to sort and trim random, odd-sized boards that are generated by the operation of dismantling machines. As recovered boards travel on the conveyor, they are scanned for length, width and thickness. Boards are optimized and automatically trimmed to desired lengths. The boards of predetermined dimensions are then captured in individual sort bins.

One enthusiastic adopter of the technology is Greg Bowen president of Bo’s Pallets & Mulch, Inc. in Adairsville, Georgia. “In my opinion, the Urban Sawmill is the biggest thing to hit the pallet recycling business since the bandsaw dismantler first came on the scene,” he recently told Pallet Enterprise. “Just yesterday, my people cut 3,500 boards per hour, for a 10-hour day, so 35,000 boards, and that’s with five people, and nobody has to work hard.”

An exoskeleton is an external frame that can be worn to support a person’s body, featuring wearable robotic technologies that reduce fatigue for those performing repetitive tasks. They provide postural support that can follow the movements of the arms without misalignment or resistance. ULS Robotics, one exoskeleton vendor, offers upper body units that weigh about seven kilograms and allow the wearer to lift an extra 44 pounds. It is powered by a lithium battery.

Exoskeletons have been adopted in a variety of sectors, including construction, agriculture, services and manufacturing. In manufacturing, the automotive industry has seen the widest acceptance as automakers look to make jobs easier and safer. The trend has been driven by the difficulty in recruiting new production employees.

At around $2,000 per unit, exoskeleton cost is a barrier to adoption, but consider that some companies are offering a similar amount as a signing bonus to new employees. Instead of inducing employees to do hard jobs, why not make that work easier? At least one pallet company has successfully integrated exoskeletons, for the first time allowing women to perform jobs that previously had been limited to men. They are equipped with IoT tracking technology so that they do not get misplaced or stolen.

Pallet production jobs are challenging, and increasingly difficult to fill. Increasingly, however, new technologies are at hand to make the work easier and more engaging. If you are having trouble recruiting and keeping your people, don’t get mad. Get automated!

First Alliance Logistics Management (FALM) is a leading North American non-asset-based pallet provider. Founded in 1995 by several leading North American pallet companies, the vision of those founders was to create a company that could design and deliver national pallet programs, unconstrained by the physical plant locations of that ownership group.

It was a vision that proved to be an astute one, as FALM was subsequently followed into the marketplace by numerous pallet brokers. Today, as a Top 10 North American pallet management provider, FALM offers a network of over 225 U.S. pallet manufacturing, recycling and repair companies. It prides itself on its ability to deliver on pricing, quality, and service through the strength of its relationships with both pallet suppliers and customers alike, supported by robust technology solutions, vast industry expertise and experience, and solid leadership. To find out more, contact FALM today at (866) 376-0165, email info@falm.com or visit www.falm.com.